MIDNIGHT WESTERN THEATRE Is Coming This March From Scout Comics During a time when it's kill or be killed, a peculiar duo of adventurers come face-to-face with the dark and disturbing things that inhabit the wild west.

Welcome to the Midnight Western Theatre! Our feature presentation is a series of tales spanning across the turbulent 1860's of the United States of America. It is a time where rights have been wronged! Where the guilty plague the innocent! Where man and beast have little difference! HOWEVER, the new frontier has far more dangerous threats than the folly of man! Threats that are MYSTERIOUS!!! STRANGE!!! DEADLY!!! In such a chaotic era, who is brave enough to face these most dastardly beings? Enter our heroes, The Woman In Black and her right-hand man, Alexander Wortham! Together, they must confront what no one else can on this journey of blood, betrayal, and self-discovery!

QUOTE FROM THE CREATOR LOUIS SOUTHARD:

"This is my second comic book series, and I still find it hard to believe that it's made it this far since I first thought of the idea while I was bored at a cafe. I was sitting there daydreaming, and I thought to myself, "Oh, goth cowboys! Never really seen that before." For some odd reason, that idea never left my brain. Now, Midnight Western Theatre is a real thing, and that's just insane. I love this book's world and the characters in it, so it's going to be great sharing it with others now. I'm pretty ecstatic to work with Scout on this series, because I know it's in good hands and the story will get the treatment it deserves!" 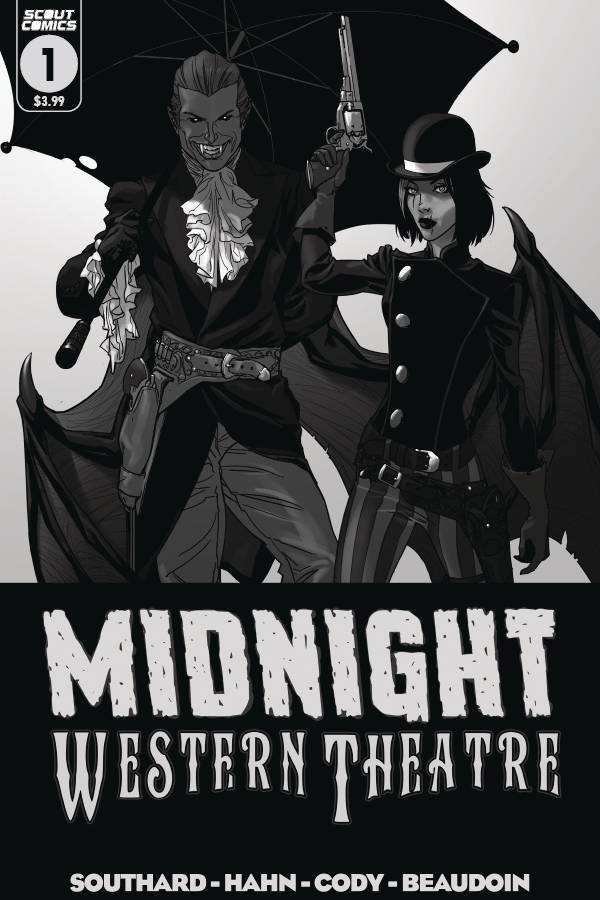 Welcome to the Midnight Western Theatre! Our feature presentation is a tale of a town under siege... The notorious Red Tom and his dastardly posse have laid claim to the once prosperous vista of Liberty Springs, but for how long? Will these outlaws be able to savor their sinful victory as two blackclad strangers suddenly arrive?